More summer weather is forecast for all of next week. As a matter of fact, starting Saturday, we will have temperatures near 90 through Tuesday and mid 80s through Thursday! I checked the forecast for VT on WCAX and the degree difference is minimal! 90's doesn't sit well with me at this point as I just packed all my warm clothing for Vermont and normally at this time, I'm in sweatshirt mode! It truly feels like the middle of August! And, we could use some rain!

Not sure what this means now for foliage in New England, but certainly it will have some degree of impact. I'm feeling like the season may come in droves now. I await reports from our locals in northern VT and Carol is headed there this weekend. Minnesotaman is there now for a month, so his reports are on the spot "real time".

Mother Nature controls the reins and after this heat, I wouldn't be surprised if it gets down right cold overnight. And that is a good thing!

I'm so done watering my lawn and using AC. Time for fall to take hold!!!!

Ct, I feel your pain. The weather certainly has been topsy turvey. Here a week ago it was 92, in two days it dropped 30 plus degrees. The colors here are are late, they're just getting going. On the 17th I went up the canyon and took pictures of the first snowfall! More expected in the high elevations tonight and tomorrow. Let's hope that doesn't happen in Vermont! Cooler weather please, but let's not skip Autumn, it's due tomorrow! Please blissful Autumn, stay awhile!
Top

Wednesday hit 80 and it has been warm since last week. CT also mentioned "we will have temperatures near 90 through Tuesday and mid 80s through Thursday". Seems like, the EARLY colors hit a wall and they are not progressing until this area gets more cool temps, which have less chances. On top of that, new forecast shows some rain showers too.
Being my travel dates early (28th Sep - 3rd Oct), I am getting little nervous now. Should I be concerned or after reaching, will I feel myself in compromised state ?
At this point, if I have to reschedule my dates to another available window (12th Oct - 17th Oct), I will be paying around $400 extra, but...
Top

Sparks: Do not change your dates! The color will be there for you! A cold front is expected to drop down from Canada according to WCAX around Friday, Sept. 29th and the progression will resume. Don't worry! You can chase the color around the state when you get there!

Janice! I hope we are going to meetup this season. Still planning on Lewis Pond on the 3rd of October. If you are in Waitsfield during the first week of October, let me know, otherwise I'll be in Middlebury for Columbus Day Weekend. I am horseback riding the morning of October 4th and am free in the afternoon in Waitsfield. Thursday the 5th is a meetup in Peacham for the fall festival with undecided back road travels in the afternoon. Hope one of these times/dates work for you!

I just took a drive around the northern Passumpsic River valley this morning. It is amazing how this heat completely stopped the color change. Many of the leaves on trees that were showing early decent color have dried up and fallen off. However, that is less than 10% of the leaves. There are still A LOT of green leaves and partially turned leaves remaining. However, as pointed out in above posts, the heat is only supposed to increase though the middle of next week. I don't see the foliage color improving at all over the next 6 days. It is true that a cold front is supposed to move through next Thursday and cool things off. However, the leaves are not going to change overnight. It will likely take 4 or 5 days, post cold front, for the leaves to approach peak. Next Sunday (Oct 1st) may be close to peak but later in the week will likely be better. I'm estimating the weekend of October 7th to be the prime weekend. I also think that due to the stagnation of color change in areas that usually change first, that there is going to be an almost simultaneous statewide color change that occurs. So no matter where you go Columbus Day Weekend, you should find excellent color.

As always, this prediction comes with a disclaimer that there is always a chance that a strong frontal storm system moves through sometime mid-week (Oct 2nd - 6th) and causes significant leaf drop. Therefore, attempting to adjust travel dates is always a crap shoot.
Last edited by From_the_NEK on Fri Sep 22, 2017 3:21 pm, edited 1 time in total.
Top

Here are a couple of shots from the last few days. 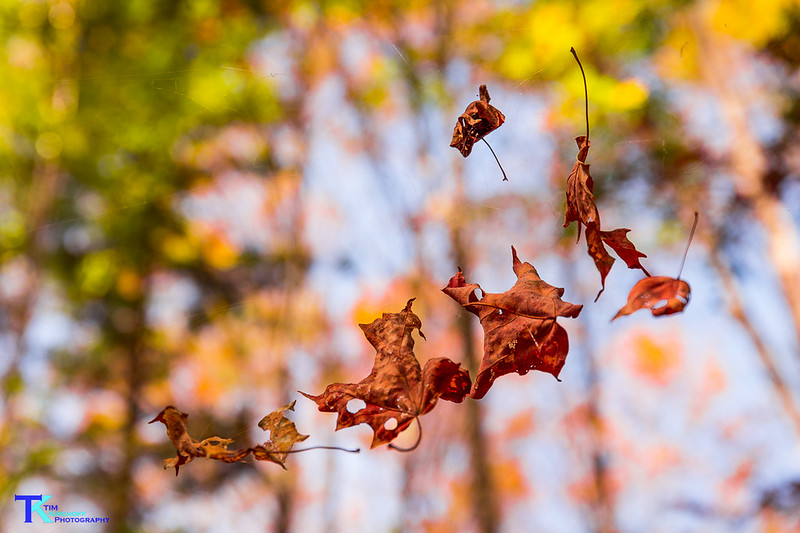 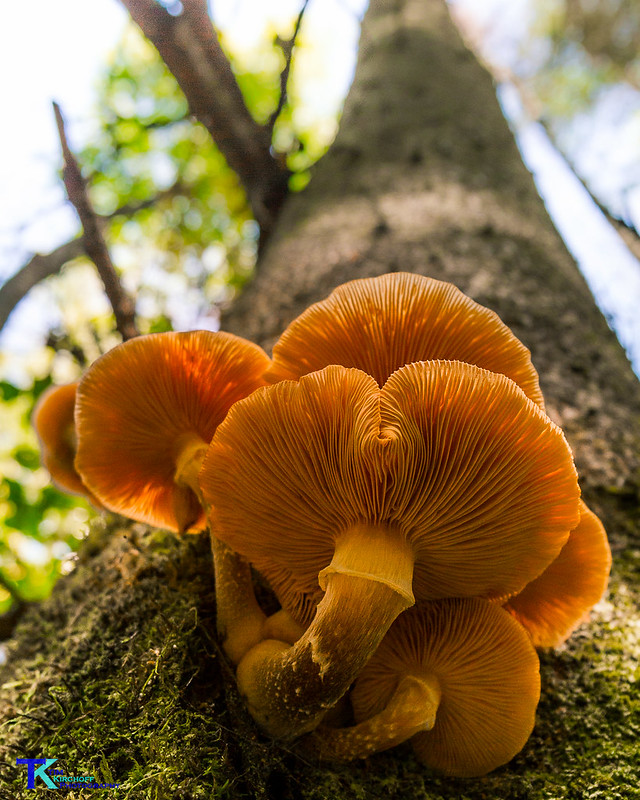 Under Mushrooms on a Tree by Tim_NEK, on Flickr 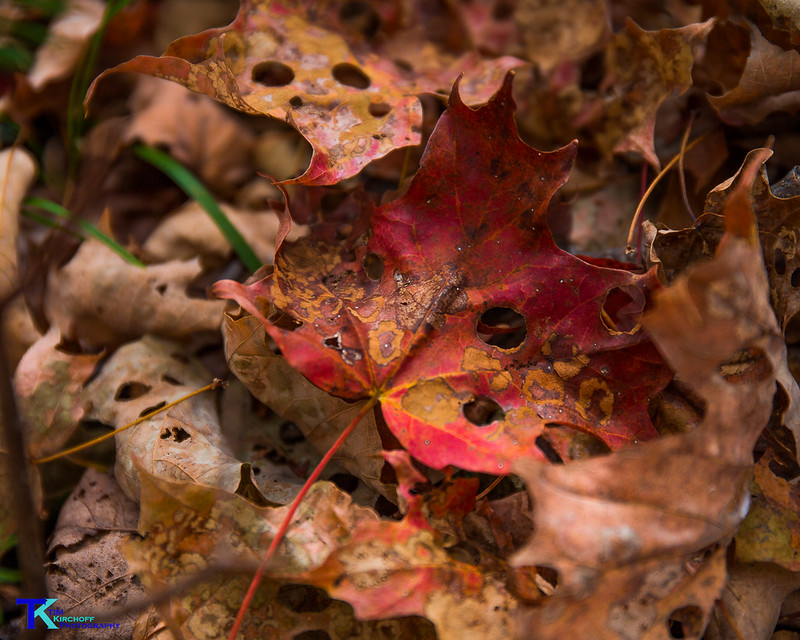 The holes you see in the leaves of the last photo are another issue that may reduce color quality in some areas. These holes are from Maple Leaf Cutters https://blogs.northcountrypublicradio.o ... af-batman/. Additionally, the last couple of years have seen forest tent caterpillar outbreaks that have stripped some entire hillsides bare of leaves. Sometimes they cause more minor damage like you see here. But in either case, don't be surprised if you see some unusually dull hilsides here and there around the NEK and northern NH (Jefferson area).
Top

Looking back a couple of years and 2015 was sort of like this in that the foliage ended up being a bit late. However, that year just started late and I don't recall there being much early color change. 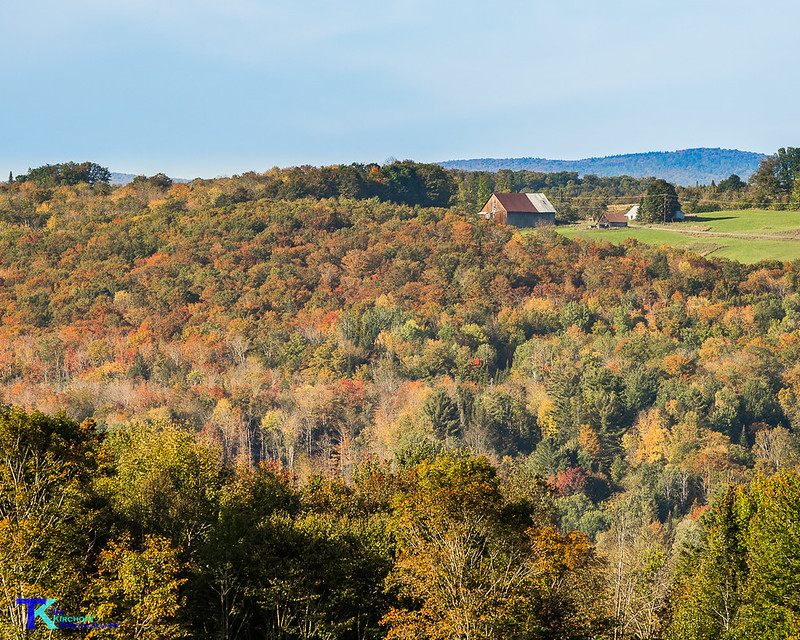 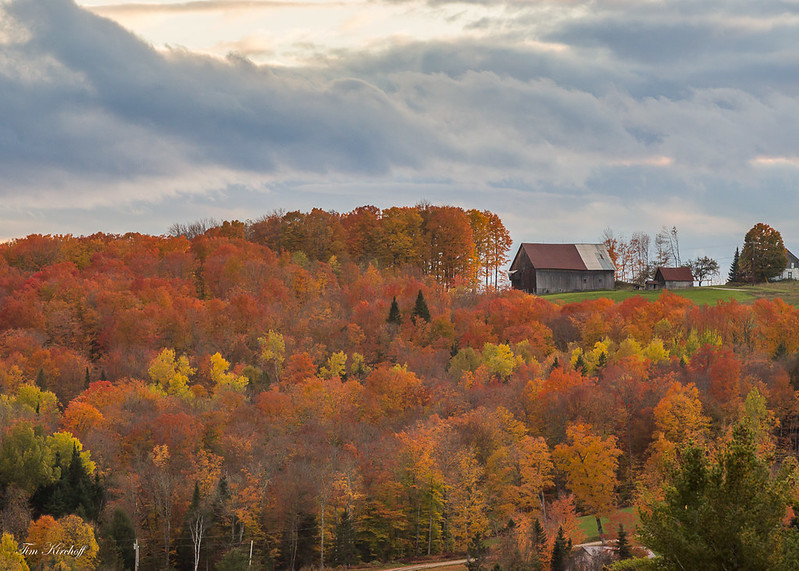 I made a long loop today, from Woodstock, to St Johnsbury, to Lake Willoughby, to Island Pond, to Norton, to Canaan, down to Colebrook NH, to Franconia, to Beaver Pond on 112, and back down, with many detours along the way to check out a number of my customary autumn "shrines." It was 70 degrees or more, even in higher elevations. I saw nothing that made me stop in order to take out my camera. Colors were mostly green, mixed with what I think of as brown mustard and dirty orange. The first photo from From the NEK matches most of what I saw. Very little red, and no bright red or orange, in this respect, quite different from the last two or three seasons. Two days ago I made a similar loop that included the Kanc, which often starts early because of its elevation. Same result. The best color I saw, although nothing like what I have come to expect at this time of the season, and nothing to kill pixels for, was north of and in the Franconia Notch area; a few splotches around Barton and Island Pond. In these places, color was early, but looked like it has potential. Willoughby looked like a summer day to me.

In the NEK the trees looked generally healthy, leaves intact but some areas with a slightly cooked sort of appearance. In the area from Woodstock up to St Johnsbury a significant number of trees did not look healthy, dulled appearance, some with crunchy leaves, and some leafless. People around Woodstock attribute this to a fungal attack induced by excessive rain over the summer. I recall seeing this last about ten or twelve years ago.

This is my seventeenth autumn here, but this one stumps me. Based on what I have seen at this point, I do not intend to put a lot of miles on the car for at least another four or five days absent a report from someone onsite in the NEK saying the colors have arrived.
Top

Sorry your day was disappointing! I'm sure by the weekend things will improve.... Time for some non-leaf peeping fun and adventure for a couple of days?

Maybe a cruise on Lake Champlain on the Spirit of the Ethan Allen or some shopping on Church Street in Burlington or get lost in a corn maze?

(Only kidding). I thought the "shopping" suggestion might have you rolling your eyes.....

Don't get mad at me!

Tim (NEK): that mushroom photo was outstanding. The detail was great! Thanks for posting the photos of the foliage too. Maple leaf cutters, very interesting article!

I think you are right. The simultaneous statewide color display might be the way the foliage season is going to play out. Let the show begin! I expect to see great color during my week stay in central Vermont the first week of October and then into the holiday weekend. I pray we don't get any wind/rain or adverse effects from the tropics. Something to watch for sure.

Keep the info coming from up there. Everyone really looks forward to it and appreciates your knowledge and honest evaluations of the season. CT
Top

Carol: thanks for the update. I like your positive attitude!!!!

At first glance, sometimes people don't see the potential of "early color". A "soft opening" so to speak, can burst into a hillside of unimaginable color in due time. Don't underestimate early progression as all it takes are the right ingredients that are soon to come to make the foliage pop! Let's give the season a chance to come alive, which I truly believe will happen!

Thanks to all for the updates and info. I think things will turn out grand. The high here today a crisp 49 degrees, sending it your way for next weekend!

Hi Janice! The cold shot comes with my arrival into Vermont! Yay! Actually, the mornings are surprisingly cool and delightful here. 90's coming for the next two days after 88 yesterday, but truthfully, I am enjoying the weather by getting a lot of things done around the house and yard in preparation for the trip. It's so beautiful outside and with low humidity, it is not too bad. Trying to enjoy the weather knowing winter is not far behind. At least I won't be horseback riding or hiking in Vermont in the heat!