Get Your Maple On!

Get Your Maple On!

Sugaring season if fast approaching. I hope some of the locals will give us some reports and pictures of the sweetest time of the year at the sweetest spot on earth.....VERMONT!
Top

Report from Sunday Brook in Bakersfield - still too cold. No sap run yet.
Andy

Sugaring Season has been delayed big time but the polar vortex or whatever you want to call it. Winter is trying to hang on, and many Vermonters are struggling to keep warm because they have run out of wood or can't afford to buy more furnace oil. The winter is showing signs of relenting. Temperatures in southern Vermont this weekend may reach 50 degrees but in the north they won't get much above 30. If it stays warm next week, then sugaring season will start. I have a feeling it will be quick.
Board Owner and Administrator
http://www.foliage-vermont.com
http://www.video-newengland.com
http://www.video-vermont.com
http://www.scenesofvermont360.com
Top

Carol, REALLY, REALLY enjoyed theses pictures. One day I hope to enjoy surgaring season in person! But for now I'll just have to settle for the sweet results.....Maple Syrup! Also our hopes for a great sugaring seaon for all, so we can continue to enjoy those results!
Top

The weather for the next two weeks looks about as perfect as you can get for sugaring. I hope to get some pictures of my neighbor's small hobby operation this week.
The mud is going to be epically ridiculous this spring

Here are a few pictures from the other night.

This may be one of my favorites of pictures I've taken to date. The sugarhouse and waning crescent moon lined up perfect for this shot. Too bad the moon moves so much in 30 seconds 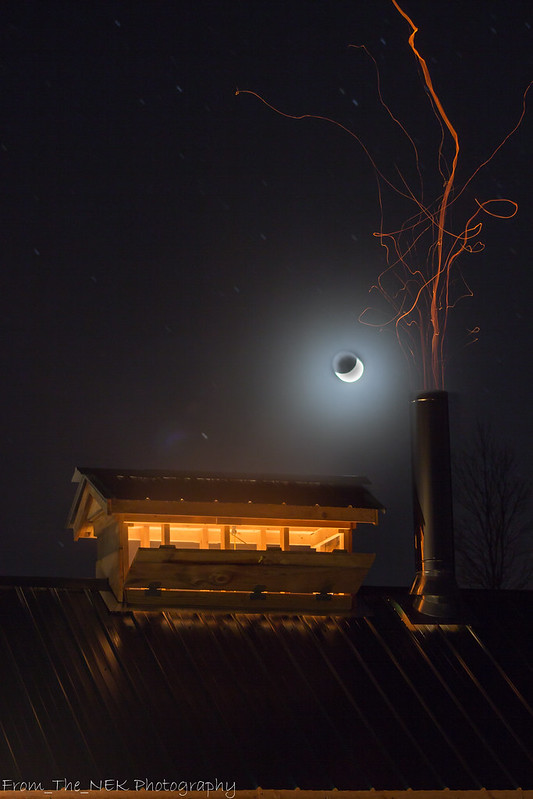 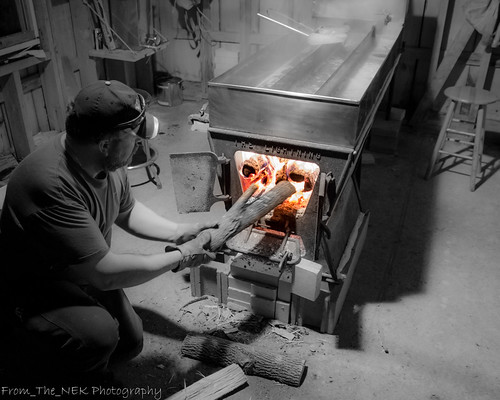 Inside the Fire box: 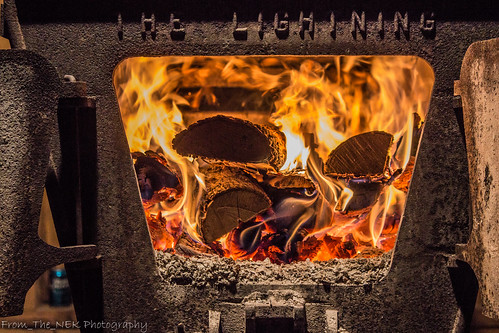 I'm still learning the best practices for the new camera. The ability to shoot in RAW and then post process has really helped my photography.
Top

Hi everyone! FIrst of all I loved everyone's sugaring photos! Carol and NEK - you both did an amazing job!

Unfortunately, I did not get my yearly trek to VT for the state's Open House Weekend in late March. Besides not working into my schedule, the week before the open house, the sugar houses were not collecting sap due to the poor weather conditions and many sugar houses were not boiling. So we decided to try Western MA in the Berkshires - same issue there. I know this week and next will be great in VT! Glad I stocked up last season!

I just got back from a small, family-owned operation in the NW hills of CT and it was just nice to smell that familiar sweet aroma right off the evaporator. I bought some maple lollipops for my nephew's kids and some Maple Cream for myself. I never tried it! Any good ideas as to what to put it on? It's so sweet!

I took a friend from work there as she had no idea how syrup was made! We drove the back roads to look at the tubes and she was really surprised at the whole operation! It was quite comical.

She is the ultimate city girl and as we drove to the remote sugaring shack in her Mercedes SUV, I knew I had a lot of explaining to do!

Sigh.... there's nothing like sugaring season in Vermont. Maybe next year! I truly missed my annual trek.

Hope you all are enjoying your VT maple syrup on waffles, pancakes, french toast and vanilla ice cream!!!!!

Hi, CT! Glad you were able to get out and enjoy the season even if it was close to home. Vermont is my favorite but I love the New England area and all it has to offer. And speaking of waffles, they just happen to be my favorite companion for Maple syrup!

Dark is my favorite, but what ever grade you prefer, "Get your maple on!"

Spring hello to some of the regulars who are almost guaranteed to be found hanging out on the Vermont Foliage Forum. Like Utah Baker, was checking in to see how the progress has been going with sugaring. Really hope the maple trees begin flowing with sap. Was out of maple syrup recently. Just had to have it. Searched for some Vermont Maple syrup in the stores. Know you guys understand, I could not find Vermont's so supported our neighbor, Canada. It was MAPLE syrup and will admit was very good during a time when I could not find Vermont's. Checked your blog, Abby, very nice pictures of your visit to your friends' Sugar House. Never heard of a hot dog boiled in sap!! Always room to learn more. NEK, your pictures of another Sugar House are awesome. Loved the special way you used black and white with the glowing red fire in the stove that caught your eye; definitely succeeded as being the center of attention. Hi Andy, Utah Baker, MMVT and CT, hope all of you fared well in your cold states during this rather brutal Winter. Andy, was thinking of you when I saw all the incredible, natural "Ice Caves" and people walking on lakes on the news. We tried dodging a bullet by having Old Man Winter see us off to an escape to Florida on a 10 degrees Winter morn but of all darned things, Old Man Winter was still hanging around to welcome us home. Hope PWT is still in Florida and not having to deal with any shortage of fuel some folks in Vermont are encountering.

Be following you more in a couple of months, come Autumn!